You may have been wondering what the HAYP Pop Up Gallery team has been up to since our last event in September, “LOVE (ICA) Is electrIC Again”. For the past two weeks HAYP curator and executive director, Anna Gargarian, traveled stateside for work (and a little bit of play) to Boston and New York. Here’s an update by Anna as she reflects on the highlights from her trip: 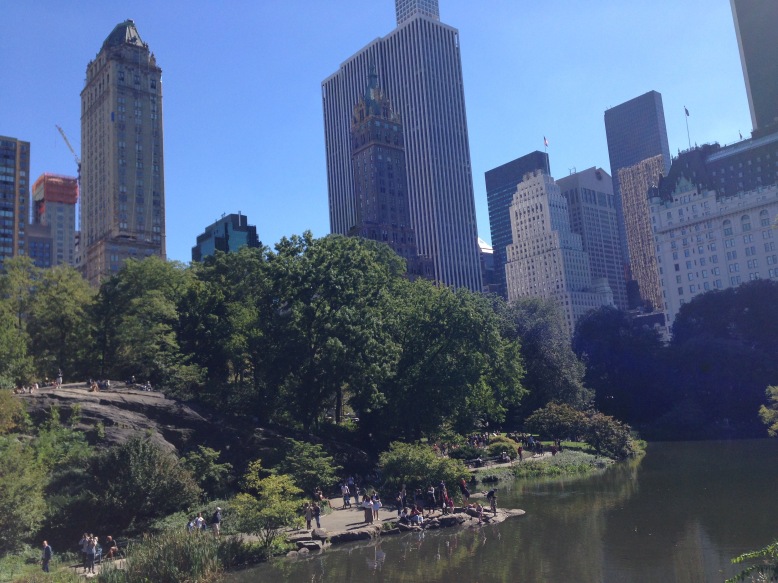 My time in New York was brief but intense. Although neighborhoods and loci of activity shift, the beauty and awesomeness of the city never change. What stood out from my trip were two very different, but equally interesting museums: The Cooper Hewitt Museum, and the Museum of Art and Design (MAD).

The Cooper Hewitt re-opened its doors in 2014 at its 5th avenue location, the 64-roomed Andrew Carnegie Mansion; its home ever since 1976. The museum’s historic architecture offers a stark contrast to the touch-screen tables, large-scale projections, and personal design “pens” that allow visitors to engage with historic and contemporary design objects in a unique and interactive museum experience.

Tapping the back of your individual “touch pen” to the description of an object allows you to “save” the object to your personally curated collection of online images. The tip of the pen allows you to draw, select, and play on the tables located at the center of the mansion’s main atrium and corridors. Visitors are invited to make and save their own designs inspired by various objects from the collection. 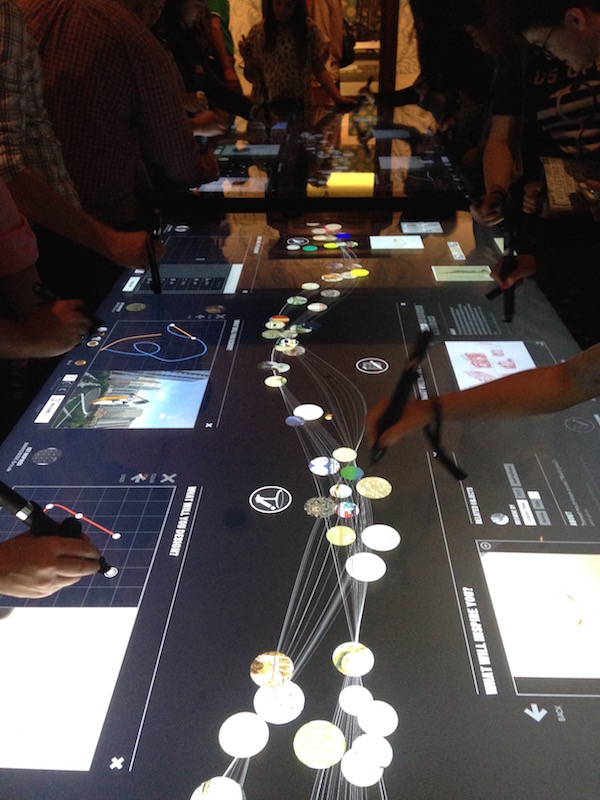 The MAD museum was originally founded in 1956 under the name the Museum of Contemporary Crafts. In 2008, the museum reopened under its more catchy name, MAD (the Museum of Art and Design) to embody a broader spectrum of interests that include design, crafts, and artisanal practice, but also architecture, fashion, technology, interior design, and the performing arts. Personally, what stood out was the museum’s display of traditional, artisanal “crafts” (something you’d imagine your grandmother making) in a bold, fresh, and contemporary way. Also unique to this museum is that it not only exhibits works, but also gives you insight into the process of craft making with its open studio artist residencies.

I loved the exhibit “Toxic Seas” by artists, Margaret and Christine Wertheim and the Institute For Figuring. The exhibit featured large-scale crocheted coral reefs that often incoorporated bits of plastic and reusable materials as a commentary on the pollution we produce and its effects on the marine environment. 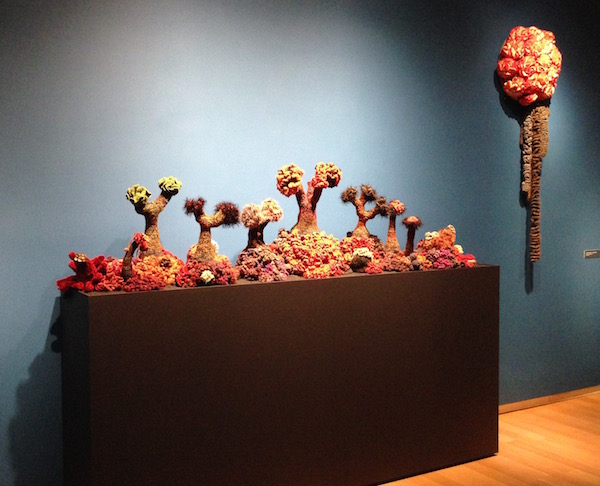 Also noteworthy, the individual pieces were collectively crocheted by women from all over the world who contributed sections of the work. The feminist undertones of elevating what is traditionally “women’s work” to the museum gallery is an added plus. Each artwork wall label included the names of each contributor and her country of origin. This reminded me of our own feminist, “Craftivist” group in Armenia, “Free the Needle”. Maybe they should get involved? Just a thought… 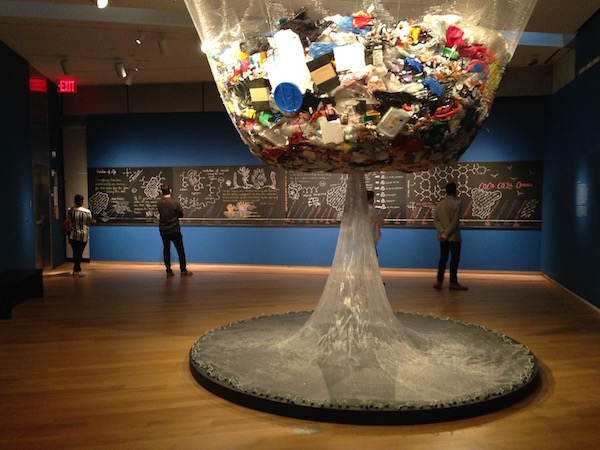 Another surprising exhibit was artist, Chris Antemann’s, “Forbidden Fruit”, a collection of risqué ceramic figurines inspired by 18th century ceramic decorative arts. Although I’m not usually partial to the ceramic arts, Antemann’s keen sense of humour, brilliant use of form and color, and her masterful use of a “high society” decorative objects to show “debased” and provocative subject matter were completely engaging and charming. I will think twice before judging ceramic figurines in the future… 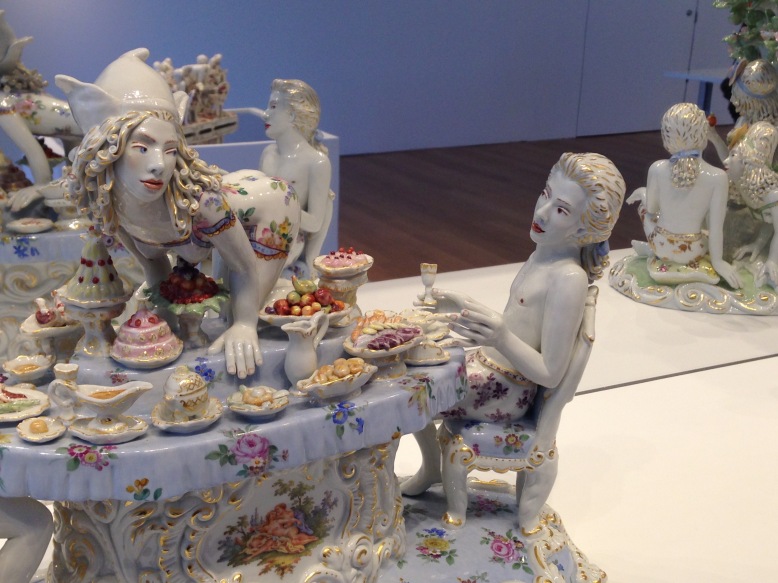 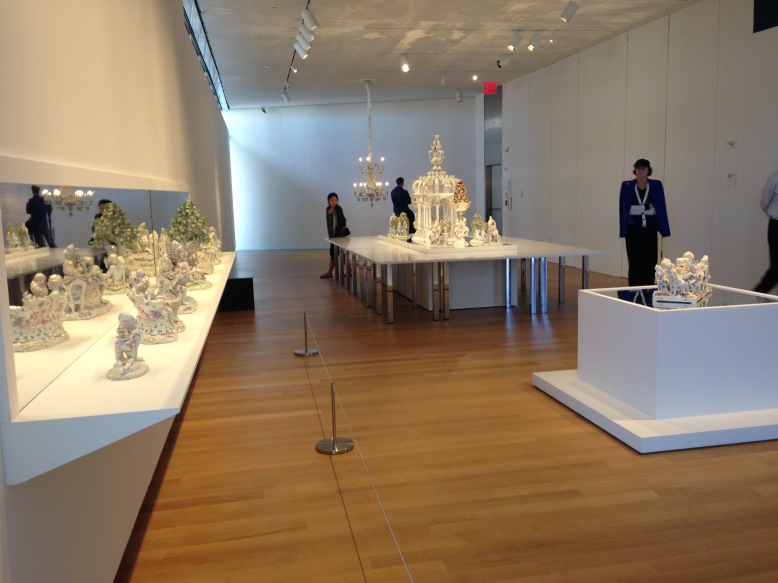 Of course, New York City wouldn’t be complete without some late night adventures with old friends….. so this happened in an abandoned factory somewhere in Brooklyn: 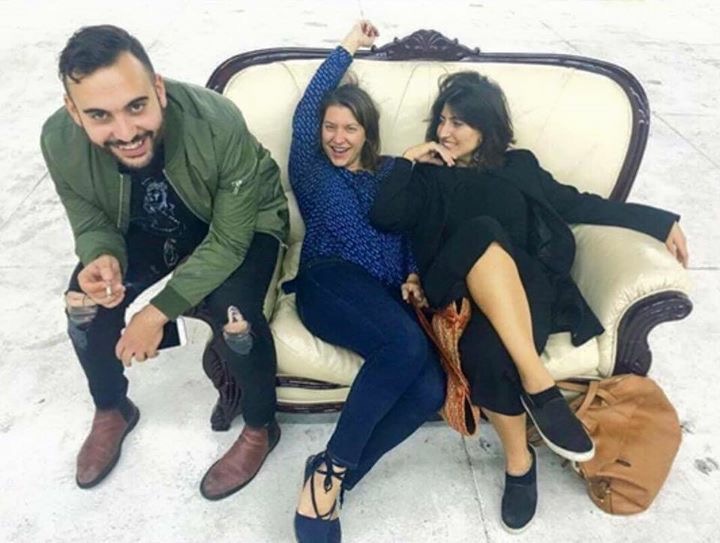 Back in the more green lands of Great Barrington, Massachusetts: 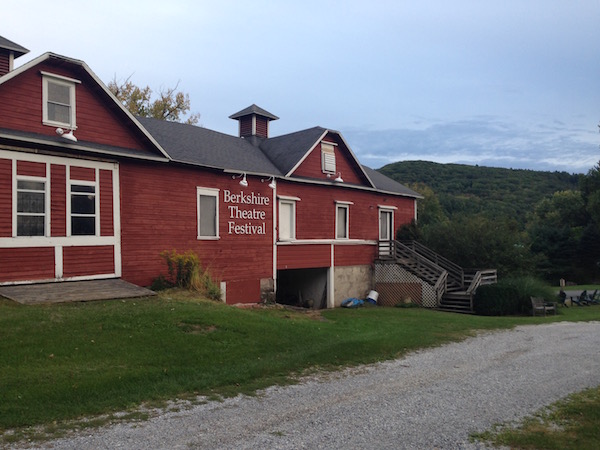 While in my home state of Massachusetts, I travelled westward to Great Barrington (about 2 hours west from Boston) to meet Suzi Banks Baum, the artist I had been Skyping/emailing/facebook messaging for the past three months in order to design and coordinate the upcoming HAYP project, “New Illuminations”. I’ve mentioned Suzi and our project before, but I hadn’t actually physically met her until last week! And what a pleasure…

Suzi is a book artist among many other things. That is, she makes handmade artist books and has been teaching book binding techniques (including coptic stitch binding which she’ll teach at our workshop this November) for many years. For Suzi, handmade books are a unique tool and means of expression for writing, illustrating, and most of all story telling. We are in the process of fundraising for our 4-day workshop and 10-day exhibition in Gyumri this November (donate here!). And another bonus of this visit, I got to reconnect with Dana Walrath, the artist I worked with to curate “Mapping Identity: Figures, Borders, and Nations” for AGBU Exhibitions in Yerevan.

Next in Massachusetts was my attendance and participation at the AIWA 25th anniversary conference, a truly amazing three-day event of inspiring talks, presentations, and conversations with women leaders from the US, Armenia, Turkey, Argentina, Lebanon and more. We even had a few celebrity speakers (always fun)!

Panel discussions were divided by category including: Global Leadership and Women, Arts and Entertainment, Entrepreneurship and Business, and Leaders in Politics. Keynote speakers included Linda Hill from the Harvard Business School (one of my favorites), Seline Dogan from the Turkish Parliament, Maro Martirosian of Armenia’s Women’s Resource Center, and Katherine Sarafian, longtime producer at Pixar Animation Studios.

Re-occuring themes in the talks were: implicit bias and gendered perspectives, approaches to leadership, how to “break the silence” and empower women leaders, and various tools for leveraging one’s skills and how to be an effective leader.

The speakers were many, and inspiring, and HAYP Pop Up Gallery was thrilled and honored to be a part of the conversation as a member of the “Business and Entrepreneurship” panel. Co-panelists included Hasmik Asatrian-Azoyan of Basen hotels in Sisian, Juliana Del Aguila of Karas Wines, and Vera Manoukian of Starwood Hotels. Our dynamic panel addressed questions like: 1) What are your biggest challenges, and how have you overcome them?, 2) What specificities are unique to your industry? etc.

The AIWA conference ended with a deluxe Gala, complete with awards, inspiring speeches, good food, and dancing. Below is a (blurry) picture from the evening.

And of course my trip to the states wouldn’t have been complete without a visit to an artist studio…. introducing: Marsha Nouritza Odabashian.

Marsha is among the many artists who inhabit Boston’s South End artist district. The space itself was invigorating: a large open studio on the fifth floor of a typical Boston “brown stone” building. Her studio mates include an Italian painter, and an American costume designer and tutu-maker. 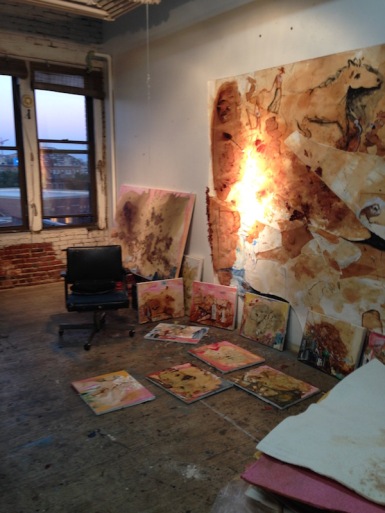 Marsha works in oil paint, ceramics, acrylic, and other experimental media and uses just as wide a variety of surfaces for her works, including all types of paper, sponge, canvas, wood and more. Her work explores identity and shows reoccurring motifs of flora and fauna (based on reality but often times distorted into fantastical elements), figural processions, and sewing needles (a commentary on woman’s work that underlies the tool’s dual function as weapon). 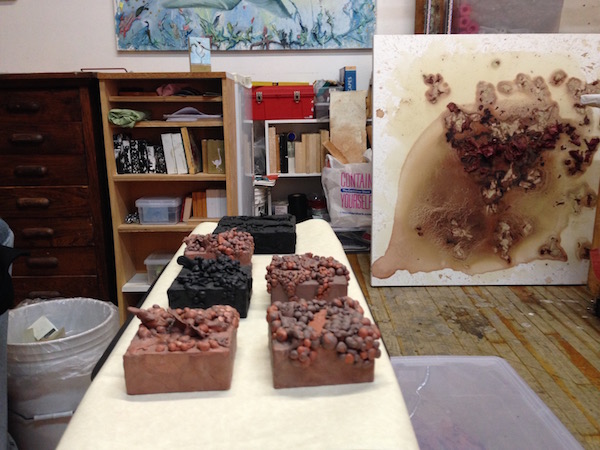 If you haven’t already noticed, Marsha’s body of work is highly inspired by Armenian manuscripts….so of course a bell went off in my head for HAYP8.0’s “New Illuminations- Codex”. Let me just say that my suitcase back to Yerevan was slightly heavier than when I left…. (hint, hint). 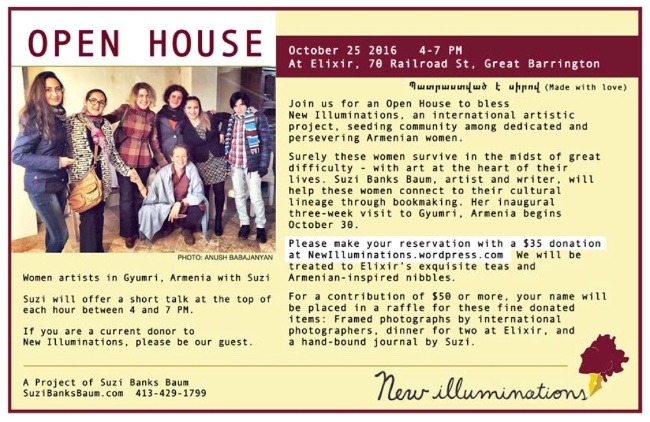 Meanwhile, in Yerevan the HAYP team will be moving forward full-throtle to find an exhibition space and key partnerships with experts and collaborators in Yerevan and in Gyumri. More coming soon!

Keep checking out the hype with HAYP Pop Up for news on this and many more projects.