Forty-six years ago, in the midst of the Cold War, 44 scientists from the USSR and the United States gathered at the Byurakan Astrophysical Observatory in Armenia. Each scientist had impeccable credentials, most of them were well-known in their field, and three were Nobel-Prize winners. The theme of the conference? Communicating with extraterrestrial intelligence.

The Byurakan Observatory is nestled on the slope of Mount Aragats, a mere forty-minute drive from Yerevan, Armenia. Founded in 1946, the observatory is most famous for its work on stellar associations, and several international conferences that were held there during the soviet era.

At first, it was the observatory’s soviet-style architecture and its emblematic astronomy tower that sparked our interest. Then we found out about a peculiar event: Communication with Extraterrestrial Intelligence (CETI), The First International Conference on Extraterrestrial Civilizations and Problems of Contact with Them was held at the Byurakan Observatory in September 1971.

For us, this was very exciting news: of all places, the first major international conference dedicated to communicating with aliens had taken place right here, in sunny Byurakan.

Inspired by the conference, we started to dig deeper into its history as we developed our exhibition concept. Hasmik spent a few lonely days at the National Science library, perusing lengthy volumes that offered first-hand accounts of that conference, meeting minutes and anecdotes. Here’s a sneak peek of what we discovered.

Searching for life in space and launching toy rockets

Extraterrestrial civilizations, their level of development (and potential aggressiveness) makes a great topic for high budget Hollywood movies. But it’s also an actual question for scientists around the world.

Skeptical scientists have occasionally criticized SETI as a form of pseudoscience, but that didn’t prevent it from being the topic of hundreds of scientific symposiums around the world, nor from benefiting from public funding.

Among the most well-known attendees were scientist Victor Ambartsumian (USSR), one of the founders of theoretical astrophysics, astrophysicist and science-fiction author Carl Sagan (US), known for his work as a science popularizer and as the initiator of the Pioneer Plaques and the Voyager Golden Records, astronomer and astrophysicist Frank Drake (US), who developed the Drake equation the Byurakan conference was based on (more on that below), and cognitive scientist and AI expert Marvin Minsky (US). 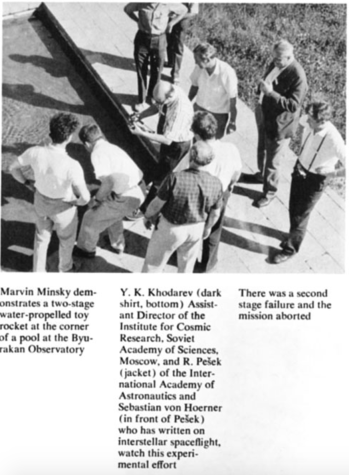 In our research, we came across this picture of some of the greatest minds from the USSR and the United States gathering around Marvin Minsky as he launched a water-propelled toy rocket in the garden of the Byurakan Observatory.

In “Remembering Minsky”, George Dyson recalls asking his friend about the toy rocket in 1994, and Marvin Minsky commented “Yes. I brought a miniature water rocket to the meeting, assuming that it would amaze everyone, because it embodied such high technology in a plastic children’s toy. The second stage was automatically launched from the top of the first stage when the first stage pressure fell low enough to release the docking device.”

This experiment was recorded in the meeting proceedings as an aborted mission due to a second stage failure. According to Minsky, however, the rocket worked very well, and the upper stage ended up on the roof of the Observatory: ‘it may still be there, for all I know.”

The Drake Equation, or the probability we’ll ever meet up with aliens

Toy rockets aside, the agenda for the conference followed each variable of the Drake Equation, a formula used to estimate the number of active, communicative extraterrestrial civilizations in our galaxy.

I know this looks overwhelming, but it’s really worth stopping here for a second and having a closer look at the factors in this equation.

The assumption here is that if we plug all these terms together, we can estimate the number of alien civilizations we could detect, and interact with. Straightforward enough. The only issue? At the time it was created, the only known value in this equation was the first one, the average rate of star formation. Many in the scientific community have pointed out that all the other variables are based largely (or entirely) on conjecture. It’s not only that we don’t know the values yet – it’s that calculating them is more about wild guesses than scientific research.

“The last terms in the equation, those framing the grandest question of whether humans are alone in their conscious curiosity, will be impossible to define until we detect extraterrestrial intelligence itself”, writes Frank Drake’s daughter Nadia Drake. “Until we hear those alien murmurs, all we can do is estimate the value of N by plugging in the numbers we know and making educated guesses about the numbers we don’t.”

The point of the equation, however, was never to come up with an estimated figure, but rather to stimulate dialogue on these topics.

Frank Drake formulated the equation as an agenda for discussion at the National Radio Astronomy Observatory in Green Bank in West Virginia, in 1961. In other words: this equation was never meant to be solved, but rather intended to frame the problem, and organize scientific discussion. As MIT astrophysicist Sara Seager told Nadia Drake in 2016, “In science, you always need an equation—but this isn’t one you’re going to solve.”

Hi! This is Earth. Are you up? Netflix and chill?

Following the recommendations made at the CETI conference in Byurakan, the Board of the Scientific Council on the Radio Astronomy Problem Area, Academy of Sciences of the USSR, approved in 1974 a Research Program on the Problem of Communication with Extraterrestrial Civilizations.

Several of the scientists in attendance at the Byurakan conference went on to actively try to communicate with extraterrestrial intelligence.

Frank Drake started an effort to send signals into space and make our planet discoverable for alien SETI programs (because in all likeliness, they’re looking for us too). In 1974, he created a message that was broadcasted from the Arecibo Observatory in Puerto Rico. The message essentially introduced humanity and gave our planet’s address to anyone who would listen. We haven’t heard back yet.

Carl Sagan and Frank Drake worked together to design the Pioneer plaques, the first physical messages that were ever sent into space in 1972 and 1973, with two Pioneer spacecrafts (Pioneer 10 and Pioneer 11). Establishing what we want to communicate with potential extraterrestrial life, and how to communicate it, is a daunting challenge. To achieve it, Carl Sagan appealed to his then-wife, artist Linda Salzman Sagan, to craft the message. On the final plaques, the relative position of the sun to the galaxy, the solar system, the silhouette of the spacecraft, as well as two nude figures of a man and a woman, were engraved.

Carl Sagan continued working on refining planet Earth’s messages to aliens, eventually putting together the Voyager Golden Records, phonograph records which contain sounds and images of Earth’s inhabitants. These records were attached to the two Voyager spacecrafts launched in 1977, that are still traveling through space (Voyager 1 was the first spacecraft to enter interstellar space in 2012). They haven’t been intercepted by an extra-terrestrial border management force yet. But if they ever are, aliens will be hearing enthusiastic greetings in 55 languages, including Armenian!

Every story we uncover about the 1971 CETI conference only makes us more enthusiastic about working with artists and scientists in Byurakan this fall. The project is called CETI Lab, and consists of an artists’ residency and exhibit, in which artists and astrophysicists come together to collectively imagine communicating with extraterrestrial intelligence. More information will come soon!

3 thoughts on “The soviet-era conference on communicating with aliens”